The postmortem was performed by the referring veterinarian.Â There were multifocal firm regions in the right middle lung lobe and a mass compressing the right medial bronchus.Â Lung and mediastinal lymph nodes were submitted for histopathological examination.

Lung: There are multifocal to coalescing inflammatory areas effacing the normal lung parenchyma.Â These areas are characterized by large numbers of neutrophils and macrophages with abundant foamy cytoplasm that occasionally form multinucleated cells.Â Within the inflammatory foci there are many round large, 30-60 Î¼m in diameter spherules with a thick double wall (up to 2Î¼m) fungal yeast.Â Some of these organisms represent the variable morphology typical of Coccidioides immitis, such as mature spherules with round sporangia with thick birefringent capsule containing endospores or immature spherules containing blue flocculent material.

The disease is also known as San Joaquin Valley Fever (in California), Desert fever, and Valley Fever.Â It is an endemic disease in specific ecological regions that include the southern United States, northern parts of Mexico and some countries in South America.Â Coccidioidomycosis is a dimorphic fungus; in soil it presents as a mycelium or arthrospore form that behaves as a saprophytic organism, and when the fungus gains access to tissues and body fluids it becomes the spherule form where it behaves as a parasitic organism.Â The pathogenesis starts with inhalation of the infective arthrospores (common in dry environment especially after a long dry weather season followed by heavy rain) or direct inoculation to the skin.

Even though the disease affects humans it is not considered a zoonosis.Â This disease is not transmitted through animal-animal contact.Â The only mode of transmission is through contaminated soil or dust with mature arthrospores.Â Coccidioidomycosis could develop infective arthrospores during fungal culture and laboratory workers should be cautioned for possible source of infection.

Cats are not particularly susceptible to coccidioidomycosis compared to dogs.Â The most common presentation in cats is skin and pulmonary.Â Clinical signs are not very specific, as this organism can affect different tissues including skin, lung, eyes, nervous tissue.

Greene described 48 feline coccidioicomycosis cases with skin (56%), respiratory (25%) musculoskeletal (19%), and CNS and ophthalmic (19%) involvement.Â There is no current effective treatment available.Â Fungal culture is not a useful diagnostic tool since definitive identification depends on spherule formation which is the only form in tissues during the parasitic phase of the life cycle of this peculiar fungus.Â Species affected by this fungus include many mammalian species such as dogs, cats, horses, sheep, cattle, pigs, non-human primates and South American camelids.

The OIE reports this disease as a differential for tuberculosis since the granulomatous, multifocal to coalescing inflammatory process will efface the normal architecture in lymph nodes and lung similar to the pattern encountered in tuberculosis. 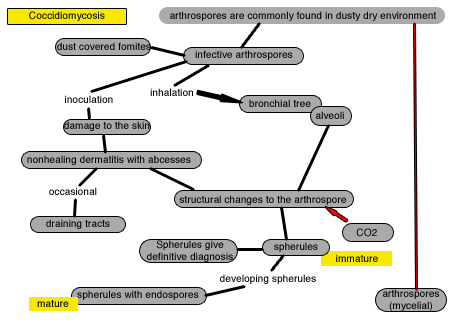 Conference participants discussed the typical clinical presentation of Coccidioides immitis infection in the dog and cat.Â Most infections in the dog are pulmonary, with occasional systemic dissemination to multiple organs including bones and the skin.Â Bone infections tend to occur in long bones, and result in both lytic and productive lesions; thus, radiographically, coccidioidal osteomyelitis is included in the differential diagnosis for osteosarcoma.Â In contrast to dogs, the lesions in cats are primarily cutaneous and clinically characterized by multiple draining nodules without underlying bone involvement.

Conference participants also briefly reviewed some of the microorganisms which reproduce via endosporulation, including :