Approximately six months old, no gender noted, green grouper (Epinephelus coioides).Eleven thousand green grouper (Epinephelus coioides) were imported from Taiwan in October 2008 and delivered to nine cages in Hong Kong SAR for culture. In mid-June 2009, gradual mortalities began to occur. Up to 70% of the fish displayed clinical signs of lethargy and whirling swimming movement. There were no external lesions noted. Microscopic examination in the field revealed gill parasites. Seven fish were submitted for pathological examination.

Moderate levels of parasitic infestation of the gills identified as dactylogyrid flukes. No other significant findings.

Spleen: Diffusely, normal splenic architecture is disrupted by the presence of hypertrophic cells that have enlarged nuclei with stippled, faintly basophilic cytoplasm. Small numbers are contracted and densely amphophilic. Some cells measure up to 25 μm in diameter. 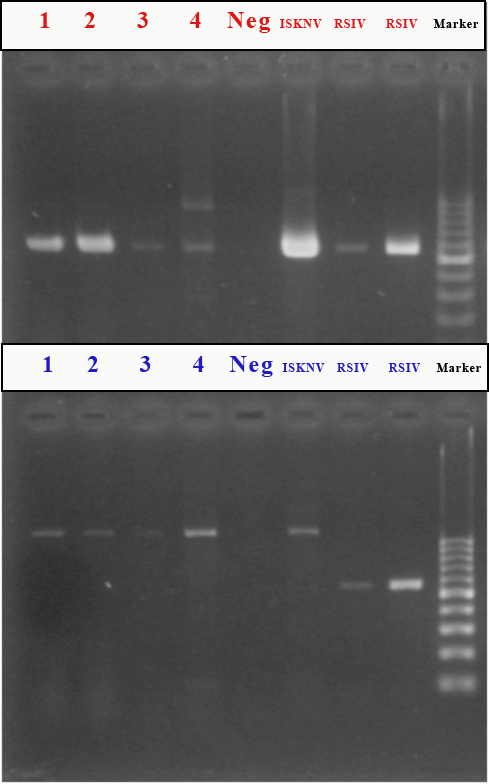 Iridoviridae gets its name from Tipula iridescent virus, which grows in the haemocele of the crane fly (Tipula sp.) and makes the fly iridescent. The iridoviruses may have an envelope derived from the host plasma membrane. This membrane may not be critical for infectivity but enhances it. The iridoviruses are large isometric viruses with icosahedral symmetry, 130-133 nm in diameter, and comprise a spherical nucleoprotein core surrounded by a membrane consisting of lipid modified by protein subunits. The genome consists of a single linear molecule of double stranded DNA. Transcription and DNA synthesis are nuclear. Virion assembly is cytoplasmic.(4) Replication occurs in two stages: the first stage is in the nucleus and second stage is in the cytoplasm.(1)

Piscine iridoviruses belong to the genera Ranavirus, Lymphocystivirus and Megalocytivirus. In recent years, the genotypical variation between newly found iridovirus strains included in the genus Ranavirus has been studied in this viral family. However, the properties of and variation between iridovirus species have not been well characterized except for a few iridoviruses isolated from amphibians. Members of the Megalocytivirus genus produce characteristic basophilic inclusion bodies in the enlarged cells of host fish organs, which have been collected from mass mortalities occurring in wild and cultured fish species. Many other piscine iridoviruses have been reported in Asian countries from more than 100 different species, including freshwater and marine fish.(4)

In this case, gel PCR was performed on tissue homogenate by using two sets of primers according to the recommended World Organization for Animal Health (OIE) protocol. RSIV1 primers revealed virus in all tissues tested (i.e., spleen, kidney, brain, and eye). RSIV1 (Forward & Reverse) primers are used for the amplification of the gene sequence (570 bp) of both RSIV DNA and ISKNV DNA. RSIV4 primers were used for amplification of DNA gene sequence (open reading frame, ORF) (563 bp); however, all results were negative.(3) RSIV4 primers (Forward & Reverse) amplify RSIV, but not ISKNV DNA. These results indicated that the virus detected in these tissues is ISKNV, one of the causative agents of Red sea bream Iridovirus Disease.

The first outbreak of RSIVD was recorded in 1990 on Shikoku Island, Japan. Since that time, the disease has also been found widely in East and Southeast Asian countries, including Chinese Taipei, Peoples Republic of China, Hong Kong, Republic of Korea, Malaysia, Philippines, Singapore and Thailand. Transmission is horizontal via the water. Vertical transmission of RSIVD has not yet been investigated. Carrier states of the agents have also not yet been investigated.(3)

As in this case (which occurred in July 2009), disease outbreaks seem to occur most often during the summer months when water temperatures are 25°C or above.(3) Diseased fish are typically lethargic, show severe anemia, petechiae of the gills and hypertrophic spleens.(6) The susceptibility of juveniles is generally higher than adults.(3) The only clinical sign seen in this case was lethargy. Histological preparations characteristically show enlarged cells of the spleen, kidney, liver and gill.(4) Hematopoietic tissue is located in the stroma of the spleen and the interstitium of the kidney in teleosts. Therefore, histopathological observations are consistent with the anemia and splenomegaly observed in fish with RSIVD.(6) Not all of the fish in this group had histopathological changes and many had no lesions in any organ examined.

We found some inconsistencies in the terminology from the literature regarding the enlarged cells seen in RSIVD. Some texts and journals refer to the hypertrophied cells as having inclusion bodies, while others distinctly refrain from using that term.

Participants noted that, although cells displaying advanced cytoplasmic effects (i.e., degeneration and necrosis) are seen in the tissues examined, the more prominent feature in these sections is cytomegaly, which is typical of Megalocytivirus infections.

In addition to RSIVD, proficiently described by the contributor, participants discussed other viruses in the familyIridoviridae that affect commercial fish production. Specifically, Lymphocystivirus spp., including lymphocystis disease virus 1 (LCDV-1) and LCDV-2, cause lymphocystis disease in many species of freshwater and marine fish.(2) These viruses infect fibroblasts in the skin, gills, and internal connective tissue and arrest cell division but not cell growth, resulting in markedly hypertrophied cells (i.e., lymphocysts) that can reach up to 100,000 times their normal size.(2) Microscopically, lymphocysts have the following distinct features: a large nucleus, a hyaline-like capsule, and bizarre and segmented cytoplasmic inclusions. Grossly they appear as raised, pearl-like lesions. Lymphocystis is generally a self-limiting disease and is rarely fatal, as fish usually slough the external lymphocysts; however, the virus does impact the fish industry due to the cosmetic effects in fish sold for food or as ornamental fish. Additionally, the lesions may provide portals of entry for secondary pathogens.(2)