Arteries/arterioles: Moderate to severe deposition of amyloid and fibrosis are also seen in the intima and media of arteries and arterioles in the liver, left ventricle and septum.

Left adrenal gland: Adrenal medulla is densely cellular with cells arranged in packets and nests and supported by a moderately fine fibrovascular stroma that occasionally thickens and dissects the parenchyma, leading to a disarranged lobular pattern.Â The mass is composed of round to polygonal cells exhibiting mild to moderate anisocytosis and anisokaryosis.Â The cytoplasm of neoplastic cells is finely granular, eosinophilic and most often poorly demarcated.Â Nuclei are round to oval, hyperchromatic, with finely stippled chromatin and most frequently, no nucleoli.Â Mitotic figures are rare.Â Neoplastic cells are synaptophysin positive (neuroendocrine origin) and are found intravascularly within adjacent mesentery and extending directly from the adrenal gland into an adjacent large artery (phrenicoabdominal artery?), subcapsularly and supracapsularly (infiltrative growth pattern).Â Scattered binucleated cells, haemosiderophages and cytomegaly are observed.Â Occasional vascular degeneration with mineralization (calcification) is seen in the adrenal cortex.Â Due to the medullary mass, a moderate to severe, diffuse cortical atrophy is present.Â Transition between adrenal medulla and cortex is multifocally poorly demarcated and in scattered areas a rim of fibrous tissue separates the two regions (pseudocapsule formation).

Amyloidosis consists of extracellular deposition of protein fibrils in beta-pleated sheets which are resistant to proteolytic cleavage and insoluble.Â The most frequent secondary changes associated with its presence include pressure atrophy, chronic renal failure and hepatic rupture.Â Secondary amyloidosis occurs when there is a long term rise in acute phase proteins, to be more precise in serum amyloid A, seen in chronic inflammation or neoplasia.10,11,20 Studies have indicated its value as a prognostic marker for tumours and existence of metastases, in both humans 4,15 and animals.20 Some authors attribute a tumourigenesis role to SAA based on the fact that different binding sites to extracellular matrix (ECM) components have been found in its structure.10 The ECM provides tecidular structure, controls cell binding and so they propose that SAA possibly interacts with the ECM in a way that inhibits cellular adhesion and so promotes metastases.10 In human medicine, it has been observed to coexist frequently with neuroendocrine tumours.21 In humans, amyloid precursor like protein 1 has been reported to be more frequently expressed in neuroendocrine tumours of the small intestine.1 In the latter studies it was also observed that in intestinal carcinomas, amyloid precursor proteins co-localised with synaptophysin, leading to the hypothesis that they would be transported to the cell membrane by synaptic microvesicles and affect tumour cell adhesion and invasiveness.1 It has also been described that epinephrine increases the release of acute phase proteins7. Amyloid deposition is most commonly seen in the spleen, liver, enteric mucosa and arterial walls.5,12 The following table shows the main types of amyloid found in animals:
Pheochromocytomas are tumours of chromaffin cells and are the most frequent tumours observed in the adrenal medulla.2 Even though chromaffin cells produce catecolamines (epi/norepinephrine), in animals, clinical signs from their overproduction are rarely observed with a pheochromocytoma.Â When present, these symptoms consist mostly in tachycardia, cardiac hypertrophy and arterial sclerosis.Â In the rat, epinephrine has also been referred to act as a stimulant of interleukin release and secondary acute phase reactant.(7) Pheochromocytoma pathogenesis is unclear and has been associated in rats with chronic progressive glomerulopathy.(2,14,16) Genetic factors, pituitary tumours, hyperthyroidism, autonomic nervous system stimulation, hypercalcaemia, vitamin D3 and diets rich in calcium, retinoids or sugars have also been implicated.(2,14,16,23) Interaction between the kidney and the adrenal gland include renalase, which is produced in the glomeruli and proximal tubules and induces metabolisation of catecholamines, and thus lead to a decrease in the blood pressure.(3,7,19) There is a reduction in renalase synthesis in uraemic and end stage renal disease patients.(3,8,19) The renalase gene is also expressed in the heart, skeletal muscle and liver.(8) In animals, hypertension is most commonly of secondary nature and associated with chronic renal failure.Â However, the reverse can happen, where renal changes can also be due to reduction in renal perfusion secondary to hypertension.(13)

Arteriolosclerosis includes various pressure-induced vascular changes and can be either mainly hyaline or hypertrophic.Â In the uraemic dog, the arterial and arteriolar lesions consist of deposition of subendothelial fibrin, internal elastic lamina dystrophy, necrosis of smooth muscle, mineralization and occasionally neutrophilic infiltration.(13) All of these changes were seen in this case together with the amyloid angiopathy, leading to the hypothesis that together with glomerulosclerosis, arteriolosclerosis was a more predominant feature that worsened and no longer is presented as blatant lesions.

Secondary hyperparathyroidism is seen in chronic renal failure and leads to osseous resorption in an attempt to increase the calcium levels.Â This mechanism changes the Ca:Ph ratio and as a consequence dystrophic calcification occurs.

The conditions seen in this case and their severity and distribution suggest that they are aetiologically related. Below, based on the above provided information, a hypothetical graphical simplifying attempt of the relationship between the present conditions is provided. 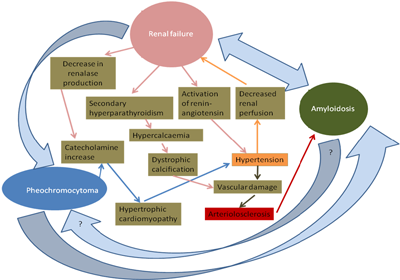 The contributor provided an excellent description of amyloidosis, and our comment will only elaborate on some other details of this important pathologic condition in animal species.

Primary amyloidosis is rare in animals and may be encountered in the horse in the nasal vestibule and rostral parts of the nasal septum and turbinates.Â Secondary amyloidosis is far more common due to a reactive change caused by the synthesis of serum amyloid A (SAA) in the liver in response to IL-1, IL-6, and TNF in chronic inflammation. Cheetahs and Siberian tigers develop renal medullary interstitial amyloidosis in response to gastritis.Â Familial amyloidosis is usually autosomal recessive, and autosomal dominant in Abyssinian cats, which along with the Chinese Shar Pei develop amyloid in the kidneys, and Siamese cats develop amyloid in the liver.Â Localized amyloidosis can be deposited in the pancreas of cats and non-human primates with type II diabetes mellitus. Chickens can develop amyloid arthropathy associated with Enterococcus faecalis, and common sites of amyloid in geese and swans are the spleen and kidneys.Â In dogs, Hepatozoon americium and Ehrlichia can is have been associated with renal amyloidosis and glomerulopathy, and excess dietary vitamin A has been associated with renal amyloidosis in cats(12,13,19,20,22) .

Renal amyloidosis may be presumptively diagnosed from a urine protein:creatinine of greater than 18.Â A ratio of less than 0.5 is considered normal, 1-3 indicates tubular disease, and greater than 3 indicates glomerular disease. Ultrastructurally, amyloid appears as non-branching fibrils of 0.7-1.0 um diameter that form single to laterallyaggregated bundles or interlocking mesh-like ribbons that lack periodicity(6).

A differential diagnosis for the mural thickening of coronary arteries in this case is hyalinosis, a relatively common finding in the older dog.Â Hypertrophic hyalinization (hyalinosis) generally occurs in the intramural coronary and small meningeal and cerebral arteries of old dogs.Â There is generally no clinical significance in the CNS lesions, but this may result in multifocal intramural myocardial infarction.Â If valvular endocardiosis is present, these two lesions may lead to congestive heart failure.Â The mural deposits are most often fibrin or glycosaminoglycans (GAGs). Amyloid, as seen in this case(13) is far less common in hyalinosis.

Vascular invasion in the adrenal gland was not present on all slides.