Gross Pathology: The parathyroid gland was markedly enlarged, had a hard texture and was firmly attached to the thyroid gland. 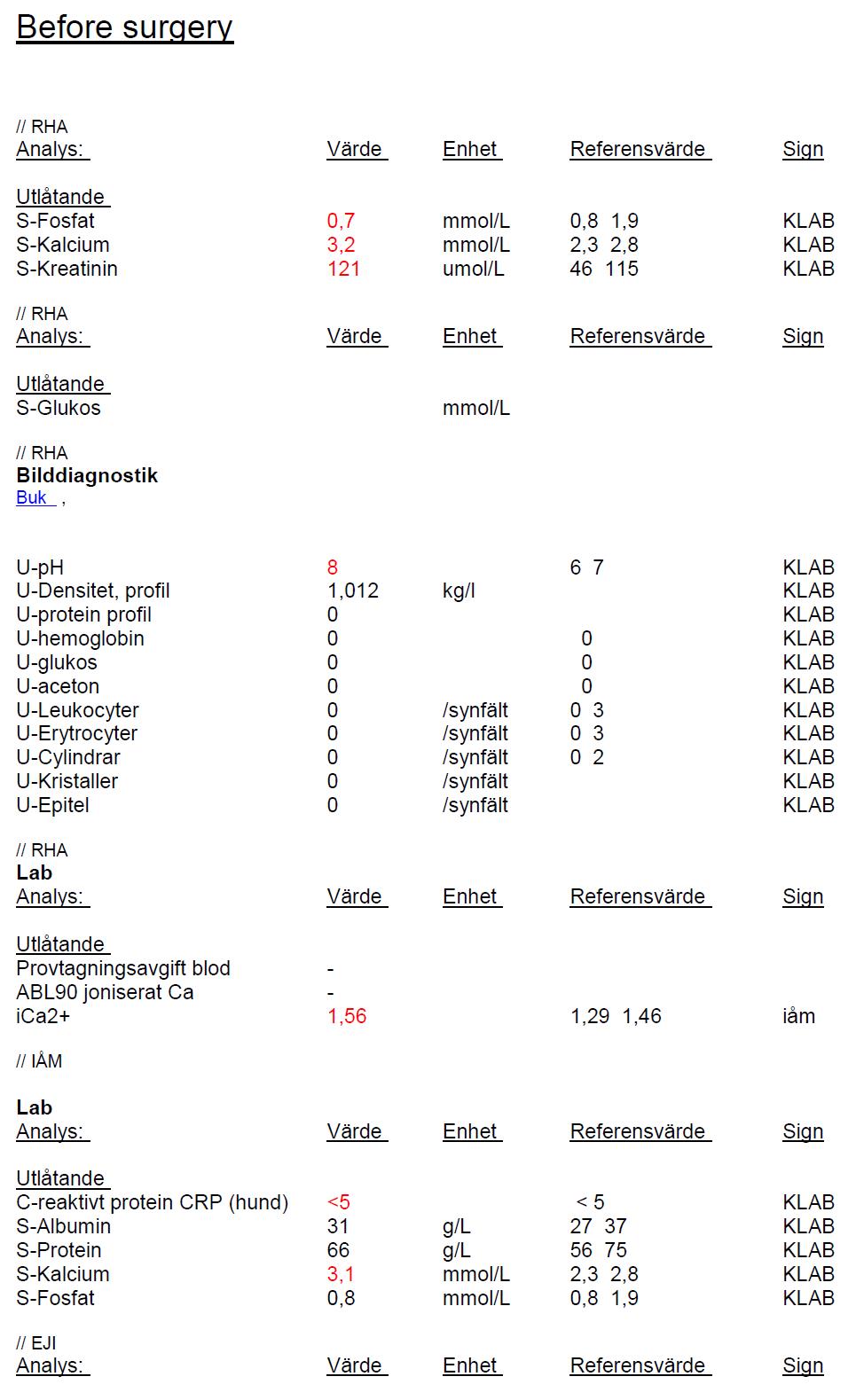 Microscopic Description: Adjacent to the thyroid gland is a large, well circumscribed, encapsulated expansive nodular neoplasia. The neoplasm mildly compresses the adjacent thyroid and focally neoplastic cells infiltrate the surrounding fibrous capsule. The neoplasm shows sheets of densely packed round cells (principally “chief” cells) and a moderate stroma consisting of thin fibrovascular tissue. Multifocally in the neoplasm are thicker bands of fibrovascular tissue and adjacent to these the neoplastic cells are arranged in a slight trabecular pattern with cords of cells palisading around thin fibrovascular septa. Scattered within the fibrous tissue are mononucleated cells with intracytoplasmic golden brown clumped pigment. The neoplastic cells reveal a mild pleomorphism with mild anisokaryosis and mild anisocytosis.  The cells have a round nucleus, scant often vacuolated cytoplasm and indistinct cell borders. Mitotic index is low (5 mitoses/HPA) with presence of few atypical mitoses. Multifocally in the periphery of the neoplasm are groups of cells with hyperchromatic nuclei and no discernable cytoplasm believed to represent remnants of active dark principal cells.  Additional parathyroid tissues are present in the periphery of the thyroid gland.

Contributor’s Comment: Parathyroid carcinomas are uncommon in domestic animals but have been observed in dogs and occasionally in cats, the etiology remains unknown. Among dogs, the tumor occurs most commonly in older animals.1,7 The tumor arises from parenchymal chief cells resulting in unregulated secretion of parathyroid hormone that cause hypercalcemia. The main differential diagnoses are the more common parathyroid adenoma and parathyroid hyperplasia. Anaplastic thyroid neoplasia and more rarely metastases of renal cell carcinoma should also be excluded.1,4,5,8

Clinical symptoms are due to hypercalcemia and include weakness, lethargy, polyuria, polydipsia and gastrointestinal disorders.2,7,9  The most common symptom in dogs with  parathyroid carcinoma  appear to be weakness while in primary hyperparathyroidism due to hyperplasia or adenoma polyuria and polydipsia seems to be more prone.7 However it is difficult to distinguish between benign and malignant etiology since the clinical symptoms are similar.  Most deaths related to parathyroid carcinoma are caused by hypercalcemia.4

Parathyroid carcinoma is not only a clinically challenging diagnosis but is also a difficult histopathological diagnosis since an overlap exists between pathologic features of parathyroid adenomas and carcinomas. Grossly, parathyroid carcinomas are larger than adenomas; the tumor is characteristically hard and greyish in appearance and is seemingly lacking surrounding fatty tissue more characteristic of adenoma.  Histologically, parathyroid carcinoma commonly invades its surrounding capsule and adjacent structures. In carcinomas, there are usually greater degrees of cellular pleomorphism than in adenomas with more frequent mitotic figures and atypical mitoses. Since mitotic figures will sometimes be encountered in parathyroid adenomas, their presence alone is not be pathognomonic of carcinoma.  Moreover, in carcinomas the chief cells form a trabecular pattern with thick fibrous bands and microscopic evidence of capsular and vascular invasion.1,2,4,5,8 Carcinomas may metastasize to regional lymph node and lung but metastases are uncommon and usually occur late in the course of the disease.2

Surgery remains the primary management in treatment of parathyroid carcinoma. Neoplastic parathyroid tissue, both benign and malignant, is known to easily reimplant, to establish a new blood supply and marginal surgical excision is adequate for treatment.2,4 Long term prognosis in dogs after surgery is often good.7

Conference Comment: Both parathyroid adenomas and carcinomas can secrete parathyroid hormone (PTH) resulting in primary hyperparathyroidism. PTH functions to regulate ionized calcium in the blood in the following ways: (1) promoting excretion of phosphorus and retention of calcium in the renal distal convoluted tubules, (2) activation of osteocytic and osteoclastic bone resorption, and (3) retention of calcium in the intestines. Bony lesions are often most prominent in the bones of the maxilla and mandible of horses resulting in a condition known as “bran disease” or fibrous osteodystrophy where there is concurrent osteolysis and replacement with fibrous connective tissue. However, bone lesions are often more pronounced in secondary hyperparathyroidism, due to renal failure or nutritional imbalance.6

Parathyroid gland adenomas are much more common than carcinomas in domestic animals. Certain breeds have familial tendencies, like Keeshond dogs, who are approximately fifty times more likely to develop parathyroid adenomas than other dog breeds due to an autosomal dominant trait. Microscopically, adenomas are composed of chief cells that are subdivided into smaller groups by a fine fibrovascular stroma. Chief cells can take one of two morphologies: (1) small amounts of lightly eosinophilic cytoplasm, or (2) large amounts of vacuolated, clear cytoplasm (“water clear cells”). The amount of cytoplasm (i.e. the morphology) is suggestive of the level of PTH secretion. More cytoplasm suggests more PTH synthesis and secretion.6

Chief cell hyperplasia can cause elevated PTH, but these lesions are often multifocal6 and not one large compressive mass as this case.

As mentioned by the contributor above, parathyroid carcinomas are often larger than adenomas and characterized by invasion into the capsule, adjacent thyroid gland or other tissues, and veins or lymphatics. Microscopically, chief cells are often more irregularly arranged, pleomorphic, and have higher mitotic rates. In cats, chief cell carcinomas are often multinodular with numerous cysts lined by attenuated chief cells.6

Attendees discussed whether this lesion is a neoplasm or parathyroid hyperplasia. Based on the number of mitotic figures and size, it is more consistent with a neoplasm. Additionally, the neoplasm, though quite large and compressive, does not appear to be invasive. Therefore, we respectfully disagree with the contributor and prefer the diagnosis of adenoma rather than a carcinoma, although this generated much discussion. There was normal parathyroid gland that was compressed against the capsule adjacent to the neoplasm which some attendees thought might have been neoplastic invasion, but the general consensus was that it was normal parathyroid gland based on a slight difference in cellular organization and a thin septum between it and the neoplasm.  Participants found it curious that the interior parathyroid gland is not atrophied, which would be expected with a PTH-producing adenoma and makes the laboratory findings perplexing (elevated pre-operative PTH with resolution of calcium and phosphorus levels after surgery).

In the normal parathyroid gland, attendees described aggregates of basophilic nuclei with cells that appeared to be fused. Some thought them to be lymphocytes, but the moderator properly identified those cells as normal cells which appear fused due to fixation artifact. The moderator explained that those cells had initially been identified as syncytial cells due to the fused plasma membranes identified ultrastructurally.3 However, a few years later it was discovered that there are several parathyroid cell variants that occur secondary to immersion fixation.10

Finally, the moderator commented about clinical implications of measuring peptide hormones such as measuring PTH and calcium in surgery after the parathyroid tumor is removed but before the surgery is complete. These peptide hormones can change within minutes and return to normal. If this doesn’t happen, the surgeon can check the contralateral gland for more tumors.