82-week-old, female, Wistar Rat, rat (Rattus norvegicus). This specific-pathogen-free rat was part of a carcinogenicity study as a sentinel. The rat was euthanized because of wasting, rectal prolapse and a palpable caudal abdominal mass.

At necropsy, a well-demarcated, round mass of five centimetres in diameter was present in the distal part of the uterus and the anterior part of the vagina and adherent to the rectum (Fig.Â 1-1).Â It was polycystic, soft, dark to brown with multiple foci of necrosis (Fig.Â 1-2).Â No other significant gross lesion was noted.

Vagina: The mass is an ill-demarcated, non-encapsulated, infiltrating cellular proliferation involving diffusely the serosa, the tunica muscularis, the lamina propria and the epithelium which was ulcerated.Â The mass is moderately cellular, made of sheets of loosely packed ovoid to spindled cells separated by large amounts of pale, eosinophilic, finely fibrillar matrix with numerous blood vessels.Â There are numerous, disseminated, variable-sized (0.1 mm to 1 cm) cavities containing eosinophilic, reticulate, amorphous material admixed with foamy macrophages or erythrocytes and lined by closely packed neoplastic cells resembling epithelium (pseudocysts; Fig.Â 1-3).Â The cells have indistinct cell borders, moderate amount of pale, eosinophilic cytoplasm, oval to fusiform, centrally-located nucleus with reticulate to hyperchromatic chromatin and one small nucleolus; the neoplastic cells surrounding the pseudocysts appear polarized with a basal nucleus.Â The cells have mild poikilocaryosis and anisokaryosis.Â Mitotic figures are rare: mean 1 per HPF (40X) with a maximum of 2.Â There are multifocal areas of coagulation necrosis.Â Few lymphocytes, plasma cells and siderophages are scattered within the mass.Â The lumen is filled with cellular debris, purulent exudate and bacterial colonies.Â

Uterine horn: The same neoplasm extends from the serosa to the lamina propria.Â The lumen is filled with pus.

Rectum and urethra: The same neoplasm invades the serosa and the tunica muscularis of the rectum.

Specific antibodies applied to sections of the tumor revealed positive staining for vimentin (Fig.1-4), GFAP (Fig.1-5) and S-100 (Fig.1-6) in the cytoplasm of tumor cells.Â The intensity was stronger for vimentin and GFAP than for S-100.

The tumor in this case fulfills the typical morphological and immunohistochemical diagnostic criteria for uterine malignant schwannoma of the rat.Â The histologic appearance and demonstration of S-100 protein and GFAP by immunohistochemical procedures allow us to distinguish malignant schwannoma from the other mesenchymal neoplasms of the lower reproductive tract.Â Another criterion of distinction is the demonstration of basement membrane by electron microscopy.(1,7)

In human pathology, two patterns are often apparent in peripheral nerve sheath tumors: Antoni A and Antoni B patterns.Â Antoni A pattern is composed of compact spindle cells that usually have twisted nuclei, indistinct cytoplasmic borders, and occasionally clear intranuclear vacuole.Â They are arranged in short bundles or interlacing fascicles.Â In highly differentiated Antoni A pattern areas there may be nuclear palisading, whorling of the cells and Verocay bodies (two compact rows of well-aligned nuclei separated by fibrillar cell processes).Â Antoni B areas are less orderly and less cellular: they are composed of spindled or oval cells arranged haphazardly within the loosely textured matrix, which is punctuated by microcystic change, inflammatory cells, and delicate collagen fibers.Â As in Antoni B pattern areas the schwann cells possess increased number of lysosomes and myelin figures and the basal lamina is fragmented; the Antoni B pattern could be a degenerated Antoni A pattern.(5) Rat malignant schwannomas can have areas resembling these Antoni A and Antoni B patterns.(7) The tumor in this case is characterized by numerous pseudocysts and loosely packed cells reminiscent of Antoni B pattern.

The differential diagnosis of malignant schwannoma of lower reproductive tract is detailed below:(9) 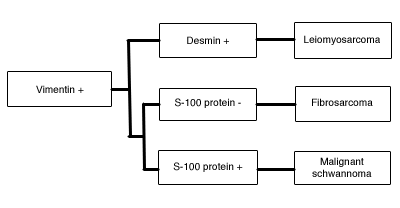 Spontaneous peripheral nerve sheath tumors are rare in rats.(1) Malignant schwannomas can arise in the subcutis, stomach, heart, vagina and uterus.(1,7) In the endocardium, the differential diagnosis includes benign endocardial schwannomas, which occur more frequently.Â They are characterized by parallel arrays of cells, sometimes Antoni A-like pattern, and absence of prominent myocardial infiltration.(9) Endocardial schwann cell hyperplasia (neurofibromatosis) also occurs in the heart.Â It forms a thin layer beneath the endocardium and is well-demarcated from the myocardium; it is composed of less than 20 layers of cells.(9)

In both dogs and cats, malignant peripheral nerve sheath tumors are locally invasive and may have pulmonary metastases.(6) The primary sites of benign and malignant schwannomas are the brachial plexus, the lumbosacral plexus and the subcutis in the dog whereas in the cat the neoplasms arise in the nerve roots of the lower thoracic and upper lumbar cords segments.(6) In cattle, multifocal schwannomas are common in older animals and have a predilection for the autonomic nervous system, including the epicardial plexus, thoracic and cervical sympathetic ganglia, mediastinal nerve plexus, hepatic plexus, tongue, intercostal nerves, and brachial plexus.(6)

There is marked slide variation, with some slides containing vagina and uterine horn while other sections have rectum and uterus.Â Conference participants commented on the abundance and prominence of the cystic structures in the tumor, and some favored the histologic diagnosis of endometriosis based on the interpretation of cystic glands within an endometrial stroma.Â In differentiating true cysts from pseudocysts, the conference moderator emphasized that cysts are lined by epithelial cells residing on a basement membrane.Â Additionally, the cells lining the cystic structures in this case are immunohistochemically positive for vimentin and negative for cytokeratin, and therefore not epithelial in origin.Â Additionally, while there are few reports of experimentally induced endometriosis in the rat, spontaneous endometriosis is typically a condition that occurs only in animals that menstruate, such as non-human primates.(3)

Another differential diagnosis considered by few conference participants included endometrial stromal sarcoma.Â This uterine tumor often invades the myometrium, cervix and nearby abdominal organs.Â The neoplastic cells are spindled and arranged in streams, intersecting fascicles, or whorls on a fibrillar matrix.Â Although areas of necrosis, inflammation and hemorrhage may be seen, cysts or pseudocysts are not typically associated with endometrial stromal sarcomas.Â This tumor is typically immunohistochemically positive for S-100 protein and vimentin, and negative for desmin and actin.Â The spindle cell neoplasm in the case of this rat is immunopositive for glial fibrillary acidic protein (GFAP), which is most consistent with a tumor of peripheral nerve origin.(2)

The contributor provides an excellent synopsis of the comparative pathology of peripheral nerve sheath tumors.