Young adult, intact female New Zealand White rabbit (Oryctolagus cuniculus).Found dead in the morning 3 days after arrival at facility. Feces and urine were present in the cage pan; food provided the day before had not been eaten. A jugular catheter had been placed by the vendor 1 week prior to arrival. There had been no subsequent experimental manipulation.

The pleural cavity contains approximately 10mL of cloudy red-orange fluid.Â Dozens of 1-3mm thick strands and large coalescing mats of fibrin bilaterally cover the cranial lung lobes. Bilaterally, the cranioventral 15% of the lungs is dark red and consolidated.Â The remainder of the lung is mottled dark red.

Multifocally throughout the liver are hundreds of coalescing 1-2mm pale tan foci.

Multifocally within the lungs, many small, medium and large pulmonary vessels have a lumen that is occluded by large numbers of degenerate heterophils and moderate amounts of fibrin and cell debris, often with centrally located colonies of large coccoid bacteria.Â Transmurally, the vascular wall is hypereosinophilic with loss of cellular detail (fibrinoid necrosis), and moderate numbers of heterophils extend into the perivascular tissue and adjacent alveolar spaces.Â Within some sections of lung there are locally extensive areas of coagulative necrosis and hemorrhage that are often adjacent to a thrombosed vessel.Â Degenerate heterophils are often present at the margin of necrotic and viable tissue with proliferation of coccoid bacterial colonies within areas of necrosis.Â Moderate numbers of heterophils and few megakaryocytes are present multifocally within the interstitium.Â Alveolar spaces multifocally contain large amounts of eosinophilic foamy material and mild hemorrhage, and the alveolar capillaries are markedly congested.Â Multifocally (not present on every slide), the pleural surface of the lung is necrotic and expanded by moderate amounts of fibrin and degenerate heterophilic cellular debris.

This rabbit had an intravenous catheter inserted into the right jugular vein by the vendor, approximately one-week prior to arrival at the research facility.Â The unexpected death of this otherwise unmanipulated rabbit was attributed to catheter-related septicemia.Â Staphylococcus aureus was isolated from the lung, liver, pericardial fluid, and pleural fluid.Â Large coccoid bacteria were also visualized histologically within the large fibrinosuppurative thrombus in the right jugular vein, near the point of catheter entry.Â It is hypothesized that infection was initiated at either the catheter exit point in the skin or from an infection of the catheter hub, which tracked down the catheter to the lumen of the vein. Embolism of the thrombus within the jugular vein would result in lodgment of the emboli in the next vascular bed, in this case, the lungs.Â This is consistent with the vasculocentric distribution of the fibrinosuppurative and necrotizing embolic lesions in lungs of this rabbit.

Vascular catheters are commonly used indwelling medical devices in both animals and humans. In a research setting, they are frequently used in laboratory animals to provide convenient vascular access for repeated injections with less restraint and handling stress on the animal. However, catheterization can be associated with many complications, the most serious being catheter-related septicemia.(1) Although catheter-related complications in humans are widely reported, there are very few reports of cases in animals.

Microbes that colonize catheter hubs and the skin surrounding the insertion site are the most common source of catheter-related infections.(2) Migration of skin organisms into the cutaneous catheter tract with subsequent colonization of the catheter tip is the most common route in humans.(2) Infection of the catheter hub, hematogenous seeding from a distant site of infection, or contaminated infusate are other sources of catheter-related infection.(1,2,3) Bacteria, including Staphylococcus epidermidis, S.Â aureus, Pseudomonas aeruginosa, Klebsiella pneumoniae and Enterococcus faecalis, and the Candida spp.Â of fungi are commonly involved in human catheter related infections.(1,2)

Studies have shown that virtually all indwelling central venous catheters in people are colonized by microorganisms embedded within a biofilm matrix.(2) The biofilm consists of both host and microbe-associated components.Â As the host reacts to the catheter, a thrombin sleeve rich in fibrin and fibronectin coats the catheter.Â Microbes may also produce an extracellular polysaccharide -ï¿½-ï¿½slime.Â Together, these form the biofilm which enhances adherence of organisms and also protects organisms from phagocytosis, antibiotics and antibodies.(1,2)

The presence of a catheter within a vessel lumen can result in endothelial injury as well as alterations in normal blood flow around the catheter, both of which predispose to thrombosis.(4) There are four possible sequelae to thrombus formation propagation, embolization, dissolution, or organization and recanalization.(4) In this rabbit, multiple emboli showered the pulmonary vessels of the lungs resulting in acute death.

Conference participants discussed the aspects of intravenous catheters that contribute to thrombosis, as accurately described by the contributor.Â Three primary abnormalities, referred to as Virchows triad, lead to thrombus formation: 1) endothelial injury, 2) alterations in blood flow (stasis or turbulence), and 3) hypercoagulability of blood.4 Of these, endothelial injury is the most important factor, and damaged endothelium can affect the other aspects of the triad; specifically, it can lead to abnormal blood flow and increased coagulability.Â Under normal conditions, intact endothelial cells prevent thrombosis by a combination of antiplatelet, anticoagulant and profibrinolytic effects.Â Antiplatelet properties of endothelial cells include the production of prostacyclin and nitric oxide, which inhibit platelet adhesion and promote vasodilation.Â Endothelial cells also produce adenosine diphosphatase which degrades ADP, an effective activator of platelet aggregation.Â Membrane-associated heparin-like molecules, thrombomodulin, and tissue factor pathway inhibitor mediate the anticoagulant properties of normal endothelium.Â Heparin-like molecules are cofactors in the activation of antithrombin III, which in turn enhances the inactivation of thrombin and other serine protease coagulation factors (factors IXa, Xa, Xia, and XIIa).Â Thrombomodulin converts thrombin to an anticoagulant which activates protein C, resulting in the inactivation of clotting factors Va and VIIIa.Â Tissue factor pathway inhibitor further impedes the coagulation cascade by inhibiting tissue factor-VIIa and factor Xa.Â Additionally, normal endothelial cells produce tissue type plasminogen activator (t-PA).Â t-PA cleaves plasminogen to form plasmin; plasmin then cleaves fibrin to degrade thrombi.

In contrast to these antithrombotic properties of normal endothelium, injured or activated endothelium induces thrombosis by inducing platelet binding and aggregation, activating the extrinsic coagulation cascade and enhancing the activation of clotting factors IX and Xa. Endothelial cells can by activated by trauma, infectious agents, hemodynamic forces, circulating plasma mediators, and cytokines.Â Endothelial injury results in exposure of the underlying extracullular matrix and subsequent adhesion of platelets to it via interactions with von Willebrand factor (vWF).Â vWF, which is secreted by endothelial cells, acts as a bridge between the ECM and the glycoprotein Ib receptor on platelets, allowing the formation of the primary hemostatic plug.Â Endothelial cells also produce tissue factor (factor III, thromboplastin), the primary activator of the extrinsic pathway of the coagulation cascade that results in secondary hemostasis.Â Finally, endothelial cells secrete antifibrinolytic substances such as inhibitors of plasminogen activator s (PAIs) which restrict fibrinolysis.4

The second factor in Virchows triad, abnormal blood flow (turbulence or stasis), is characterized by a disruption in the normal laminar flow of blood in which cellular elements flow centrally in the vessel, separated from the endothelium by a layer of plasma.Â Disturbance in this laminar flow promotes endothelial activation, enhances coagulation, brings platelets into contact with the endothelium, and prevents washout and dilution of activated clotting factors, all of which contributes to thrombosis.4

The third component of Virchows triad, hypercoagulability, can be heightened by inflammation, stress, surgery, neoplasia, pregnancy and renal disease (i.e.Â the loss of antithrombin III in the nephrotic syndrome).Â Inflammation is the most common cause of hypercoagulability, resulting in a prothrombotic state due to increased amounts of tissue factor, increased platelet reactivity, increased fibrinogen, and decreased thrombomodulin.4,5 Stress and tissue necrosis (trauma, surgery) can cause transient increases in fibrinognen.Â Lastly, conditions that increase platelet activation (e.g.Â heartworm disease, nephrotic syndrome, and neoplasia) can also contribute to increased blood hypercoagulability and thus predispose an individual to thrombus formation.5 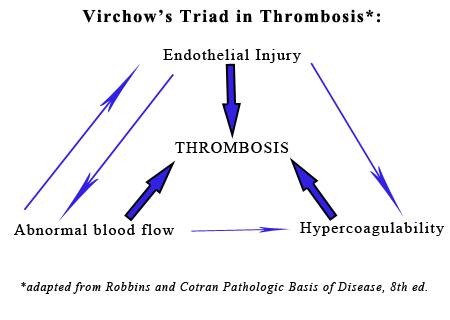